Breaking the Bad: How to Actually Break Bad Habits Quickly and Easily 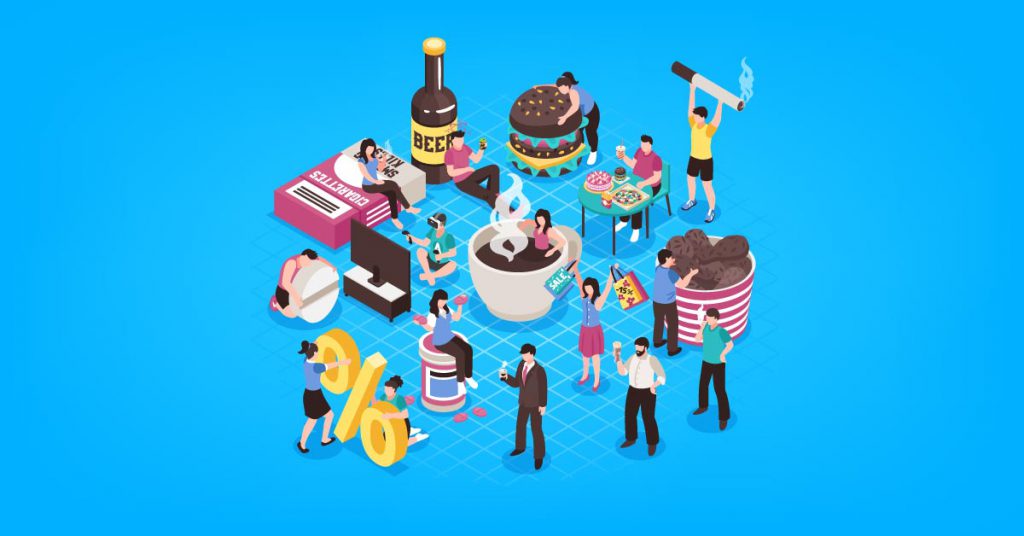 You’ve found this guide on how to break a bad habit. That means you’re one step closer to being the person that you want to be.

Bad habits are not nearly as hard to break as you think they are. It only takes an understanding of WHY you act the way you do and learning a few simple steps to break the habit.

With the information in this guide, ANYONE can break ANY bad habit and replace it with a good one.

Breaking Bad: Habits Should be Your Focus – NOT Goals

We don’t know which habits brought you here, but we’ve all got them. Everyone has at least 1 bad habit (Or 9).

Hitting snooze 8 times before getting out of bed.

Snacking on Oreos at 8pm. Then snacking on the rest of the Oreos at 9.

Your habits are everything. Who you are is a direct result of your habits.

Overweight? You don’t have a weight problem – you have poor eating and exercise habits (Unless your condition is genetic).

No money in the bank? Chances are poor (No pun intended) money management is your issue. NOT the amount of money you’re bringing in.

And it doesn’t help that everything you learn about achieving goals is 100% WRONG.

Get this: Goals should NOT be your goal. Does that make sense? Instead of focusing on the goal itself, you should focus on THE HABITS that help you achieve that goal.

Say your room is a mess because you’ve been working from home since corona sent us all running to our dens for safety. Now, say you spend an hour cleaning up. Great! Your room is clean. But how long will that last if you have poor organization and cleaning habits?

What we mean to say is that you can’t break a bad habit without first understanding the value of habits.

Before we start talking about breaking those bad habits, let’s cover HOW habits are formed so you get a better understanding of what you’re up against. 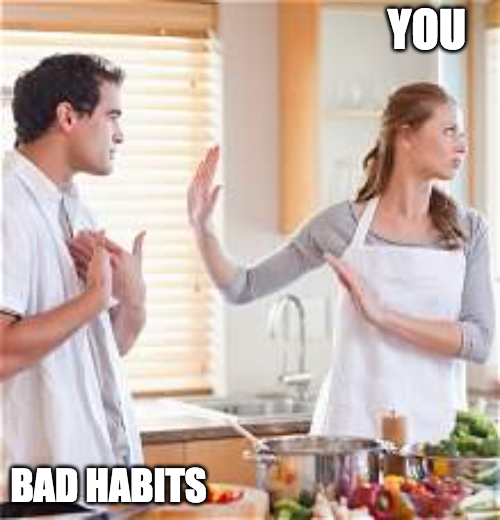 Breaking Bad: How Habits Are Formed

Habits are awesome. We tend to only focus on the bad ones, but if you think about it, most habits we have are good.

Brushing our teeth, taking a shower, waking up to go to work_most habits help us out big time.

When helpful behaviors become automatic, our brains don’t waste any precious energy on them.

That frees up our big thinker to focus on other things like figuring out how the writers of Game of Thrones Season 8 managed to ruin the greatest series of all time, or how the producers of the show decided to hand over the writing to people who had never written for television before. WHAT WERE THEY THINKING?!

According to the National Institutes of Health, habits are formed in 1 of 2 ways:

And believe it or not, research from MIT has shown that habits are actually physically wired into our brains and never actually forgotten.

That doesn’t mean you can’t break them, though. And you 100% should. In fact, breaking new habits takes an average of 66 days, according to the European Journal of Social Psychology. But you can break them in even less time if you dedicate yourself to it.

Your habits are preventing you from achieving things that deep down you know you’re capable of. Doesn’t matter what they are:

Sleeping late instead of getting up on time for work…

Quitting when things get hard…

All of these habits are like the spokes on a wheel that Daenerys Targaryean always talked about. On and on they turn, crushing your optimal self on the ground.

You need to do more than stop this wheel. You need to break the wheel! 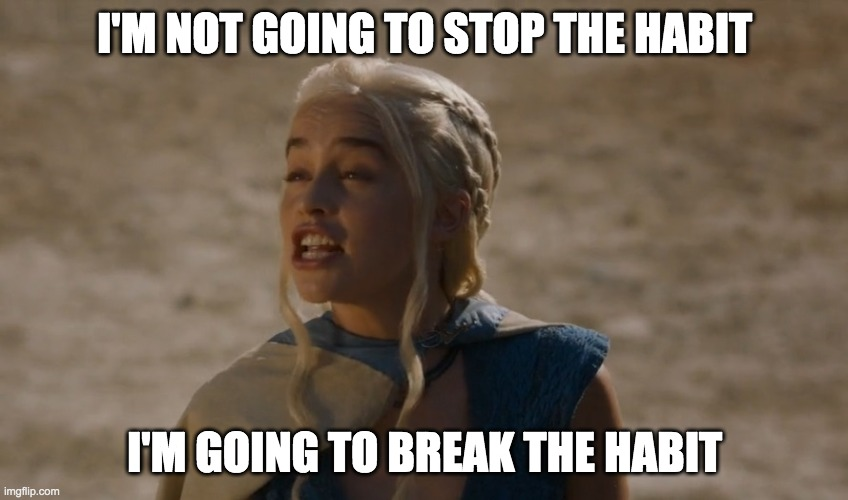 Breaking Bad: How to Break a Bad Habit for GOOD in 5 Steps

Now, it’s time to sail the Dothraki to Westeros and break this wheel.

Or just give you an easy 5-step blueprint for breaking any bad habit fast.

Step 1) Identify the Habit and Write it Down

If you want to break a bad habit, you need to know what you’re up against. Identify the habits that are causing unhealthy behaviors, lack of productivity, or other personal issues.

Write it down and place it in plain view. If you’re working from home and struggling to be more productive, write down “I will get up 1 hour earlier and not hit the snooze button”. Plaster that thing all over your home office.

Write down all of the behaviors that are leading to your bad habit. For example, a lot of us eat just because of boredom or stress.

You need to get to the root of your habits if you want to break them.

Lack of productivity because of working from home is most likely caused by distractions like social media, poor sleeping habits, or divided attention.

Once you know what’s triggering you, you can fight it.

Here’s what we mean.

If you overeat or choose unhealthy foods, don’t keep your freezer stocked with Haagen Dazs.

If you can’t control your alcohol, don’t stock alcohol in the house.

Why? Because if you have to get dressed, go to the store, and drive home just to get your fix, chances are you won’t do it.

If you hit the snooze button 50 times before waking up, use a manual alarm clock or keep your phone on the other side of the room so you can’t just press the button.

The goal is to make repeating your bad habit as hard as possible. It could be as simple as avoiding the bar if you always smoke when you drink. It can be as complex as installing a social media blocker and adding Facebook to the list, if Zuckerberg is ruining your work productivity. 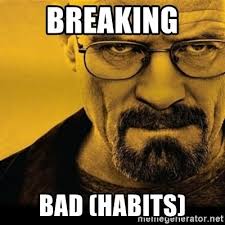 Step 4) Replace Your Bad Habits With Good Ones

Ending one habit requires replacing it with another.

Remember what we said before? The brain doesn’t actually forget habits. So if you want to end a bad one, you need to replace it with a good one.

You know all those unhealthy snacks? Replace them with veggies and hummus.

Drink too much beer? Stock your fridge with soda water.

Identify the person you want to be and start acting like them. One pushup won’t transform your body, but doing pushups every day will. If you want to break bad habits like sitting on the couch every day after work, then you need to have an actionable plan for replacing it.

Time to enlist some help!

Get your coworkers, friends, or family to hold you accountable.

It makes it way easier when others are helping. Let them know you’re trying to break the habit.

An accountability partner is a great way to keep yourself on the straight and narrow.

Berating yourself for failing is only going to make things harder. Practice self-love!

When you slip up, and chances are you will make sure to forgive yourself. Guess what? You’re human. We all make mistakes and struggle to break habits. If you break your diet, just tell yourself you’ll get back to it tomorrow.

If you hit the snooze button, just…well, actually, that one is pretty easy to break. Stop doing it!

That’s it! 5 steps to breaking any bad habit and replacing it with a good one. Habits are more important than ever with the COVID epidemic. Stay home and stay on the path to productivity!

Q: How long does it take to break a bad habit?

A: The European Journal of Social Sciences says that it takes about 66 days on average to break a bad habit but it could be as little as 18 days.

Q: Why is it so hard to break a bad habit?

Q: Why do we have bad habits?

A: We have bad habits because even the worst habits do some good or provide some reward, usually in the form of dopamine release. For example, smoking kills you in the long-term, but in the short-term it relieves stress and provides a good feeling to the smoker, so the body craves it.

Q: How can I change my habits?

A: You can change your habits by identifying the problem, finding a substitute habit, and making your bad habits more effort than you are willing to take. For example, if you eat junk food, don’t keep any junk food in the house and replace the bad food with healthy snacks.

The first step towards creating proper PDF habits for your document needs is to get yourself the best PDF software on the market. Soda PDF allows users to customize any document to their needs and is the software solution you should be using.

Whether you’re looking to create a PDF from scratch, edit the content of a pre-existing PDF, merge various documents into one PDF, convert a PDF to Microsoft Office files such as PowerPoint, Word and Excel, Soda PDF provides you with the tools to get the job done.

Available online or offline, get a taste for our PDF software solution with a FREE download of our desktop app, or try one of our many online tools today from your web browser!